The dawn of our last day in Delhi was bittersweet. We were excited to explore, but super sad that at the end of the day we had to leave. Plus we were without our friends and it just wasn’t the same.

Our tour in the morning was a student led subway tour of Old Delhi. We had no idea what to expect, but were excited to see the city like a local.

As it turned out, our guide Arun, had studied in the US and spent a good amount of time in the states. His English was great and he made us feel at ease. Walking into the subway station you would not know you were in India. It was seriously so nice. The only “different” thing was the sign asking people not to spit. Its cool I won’t, promise.

Arun bought our “tickets” for us after explaining how the zone map worked. The map had all these areas with big numbers in them. He explained that the numbers represented how many ruperts (as we so lovingly called the Rupee) it cost to ride. So if you were in a 5 zone, it was 5 ruperts or $0.07 dollars. Yes that math is correct. Or at least it was when this was written! They also don’t have tickets. They use these silly little chip coins. I’ve only ever seen the chip coin one other place in my life and it happens to be in a parking garage where I live. They are literally the dumbest things ever. Arun told us that if we were there longer than a few days, that a metro card would make sense. For this it did not. But you better hold on to that little coin because I’m pretty sure they’d never let you out if you lost it.

Once we made our way to the platform, Arun told us that the first two or three cars in each subway train were for women only. We thought that was really cool. You also had to go through security getting into the station. Again, totally okay with that.

Ascending the staircase into Old Delhi was almost like we had traveled back in time. No, that’s actually exactly what it was like. I don’t know what I thought we would see, but it wasn’t this.

So picture a narrow street lined with light poles or power poles. In a normal city these poles would mainly be for lights and you wouldn’t see any wires or anything attached to them. In Old Delhi, there were wires EVERYWHERE. To the extent that I thought if someone accidentally pushed on one of those poles hard enough, the whole web would come crashing down completely blacking out that part of the city. Like am I the only one seeing this? How is this even working?! The fact that anything has power in Old Delhi is extremely impressive. I’m pretty sure my mouth was hanging wide open for at least the first five minutes we were there. Poor Arun, I have no idea what he was so passionately talking about. 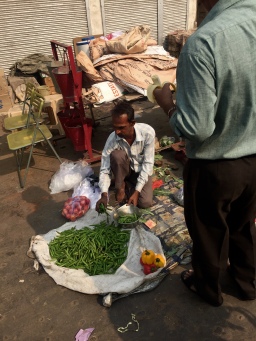 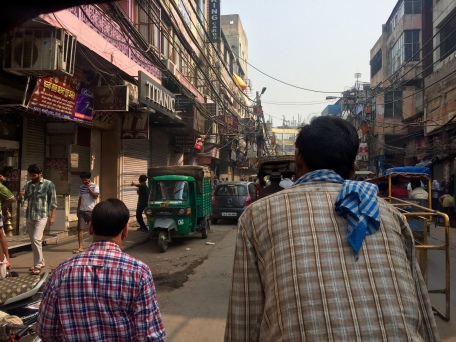 We grabbed a rickshaw and the three of us climbed in. As we slowly made our way through the streets, we passed men getting haircuts, people arranging their produce to sell, shop owners setting up for the day, food being prepared, animals of all kinds, and people, lots of people. It was noisy, smelly, dirty and unbelievably fascinating. We couldn’t get enough. 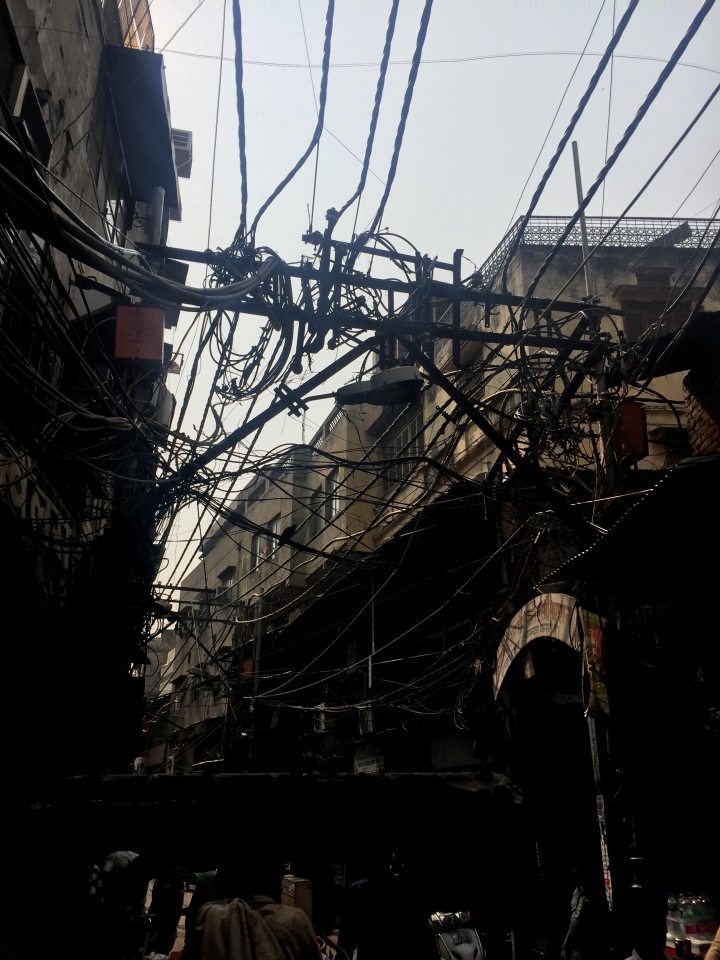 How is this working?!

Arun took us to three different temples that morning and each one was so totally different than the other. But one thing was the same. They were all playing super loud music and there were people everywhere. Some places you had to cover your hair, others you didn’t. It was a really cool experience.

We ended the morning with some lunch at a place that had a mixture of northern and southern Indian food and was very good.

That was the end of Old Delhi. Walking back to the subway I could have happily gotten lost in all of the streets and markets. By this time a few hours had passed and the number of people in the area had at least doubled. It was wall to wall. Old Delhi is seriously so captivating. And it’s a photographers dream. We will be back for you.

The last part of our day turned out to be a perfect ending to our trip. We went to Swaminarayan Akshardham, temple (I highly recommend clicking that link, especially since we couldn’t take pictures). So one interesting fact is that if you are Indian you can get into any of the heritage sites in the country for free. It’s really nice. And this one was actually free for us as well. Score!

Right, so this temple. First of all it’s HUGE. Second of all, you couldn’t bring anything in with you. No phone, camera, gum, jewelry, nothing. If you had those items with you, you had to check them. Not happening, I’ll just go with nothing. My friend carried our passports in a money belt and the last of the ruperts we had.

So as we were waiting in line to get in, it became very apparent that we were the ONLY white women around. Both of us realized at the same time that everyone was casually, or not so casually, staring at us. Thank goodness they couldn’t have cameras or we never would have made it. Finally after some more security we made it inside.

The temple itself was the most beautiful thing I’ve ever seen. But since there are no photos of it, or of me there, you’re just going to have to believe me on this.

There was still a lot of day left (well we assumed, not having a phone or watch) so we decided to check out the attractions. Yes there were attractions. The first one was a series of rooms with animatronics telling the story of the temples founder. It felt very Disney. The other “ride” we did was on a boat. You got on and it starting playing “It’s a Small World,” no it didn’t, but it may as well have.

The oddest part was at the end of the ride there was a room full of propaganda to stop eating meat. Like cutouts of animals with speech bubbles saying “we have feelings too” and things of that nature. It was pretty crazy. Not exactly something you’d see in America.

I will say snacks and drinks were silly cheap which was nice because it was about a million degrees out. We also got the most attention of the entire trip this day. It was Sunday, but there were tons of school groups. One group was staring at us (like mouths open, whispering and pointing) so intently that I waived at them. That was all it took for the group to run over to talk to us. They were so sweet and innocent, that it was cute. Again so glad they didn’t have cameras or phones.

After wandering around a little more we deemed it time to leave and headed to the airport. That was one quiet car ride. We were sad.