Waking up in our beds of heaven at the ITC Mughal, it was TOUGH to actually remove our bodies from their embrace. We got ready, and headed to the van to go to the infamous Taj Mahal at sunrise. Picking up our guide on the way (an amazing guide and an even more amazing photographer), he helped us through the ticket process. There’s a separate line for men and women so we waited to get in. News flash, they do not open the gates of the Taj before sunrise. That was a bit disappointing to me, but hey it’s the Taj, what are you going to do?

As you go through the ticket entrance you remain separated (men and women) to go through security . Again, totally fine with that approach. And they go through EVERYTHING. So don’t try and sneak in banned items, not going to happen.

Walking into the grounds at the Taj

We saw the most westerners at the Taj as well, which didn’t surprise me in the least. And a lot of us westerners were dressed in traditional attire. What is interesting to me, is that the locals wear what we would call dressy or nice clothes everywhere. So it was not uncommon to see women especially, in these beautiful outfits just walking around town or at the monuments we visited.

Walking through the “gate” to see the Taj for the first time is pretty special. The building is really breathtaking and really huge. It’s hard to get a perspective on the size until you see it. I would also encourage you to look up the history of the Taj Mahal because it’s really fascinating, but too much to share here. To understand the grandness of the building, what you really need to know is that it was a symbol of love. That’s it, just love. Pretty amazing if you ask me. It’s also not a mosque; it is a tomb with only two graves inside. There is a mosque on property though and they built another building exactly like it on the other side of the Taj maintain the symmetry. Pretty neat. 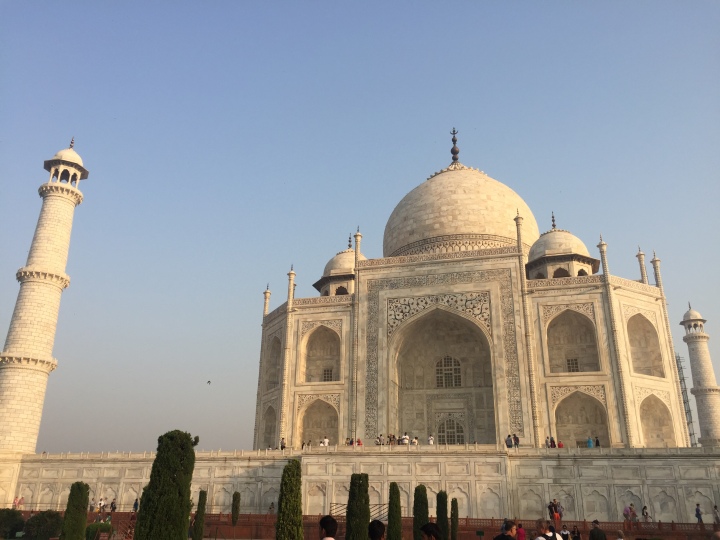 We got super lucky in that the amount of scaffolding on the Taj Mahal was very minimal. They have been cleaning it over the past six months and we were fearful that it would be covered. It was not. Thanks Taj!

I could go on forever about this building because as it turns out I kind of dig architecture and history. Go figure! Wish I had felt that way back when I was in school. But hey, I got there. And one of my friends on the trip has a master’s degree in Architectural History so I have a resource. Thanks Abby!

While we were walking around, a super sweet girl with her mom and aunts (maybe?) asked me for a photo. I said of course and she lit up like a Christmas tree. It was adorable. Having people ask you for photos is kind of strange, but she was so cute I had to say yes!

After we finished, we went back to the hotel for breakfast and naps. We actually pushed our leave time back an hour (the hotel was that good) and enjoyed our time. 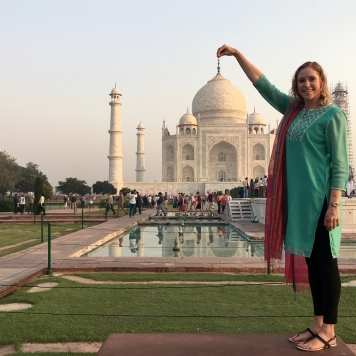 Agra, you were great. Seriously, so great.

Pink City, we are coming for you!